It’s widely accepted that cycling is great for your health; and it’s an activity that we at the Wheelie Good Guys actively look to encourage. Thanks to this year’s Tour de France – and a number of other great recent cycling events in the UK – cycling is becoming an ever more prevalent topic of political discussion.

With the required funding allocated to implementing intelligently thought-out cycling infrastructure, we could see the number of cycling participants soar in this country. Our list of 5 great benefits of cycling detailed below shows why that’s a decision your body will thank you for. 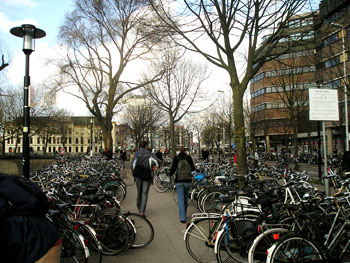 No matter your age, cycling is good for your heart. According to the NHS website, an estimated 3.1 million people ride a bicycle each month in the UK, but these numbers are extremely low when compared to leading European countries for cycling such as Denmark and the Netherlands.

We’ve previously discussed the greatness of Dutch cycling infrastructure on this site; and incredibly in the Netherlands around 30% of all journeys are carried out by bicycle – including journeys by those aged over 75. That level of participation in the UK could significantly improve life expectancy for those who cycle thanks to a resultantly healthier heart.

A study in 2010 by the University of Utrecht found that of a sample of 500,000 people who switched from driving to cycling – for short trips on a daily basis – saw a gain in life expectancy of 3-14 months. That was in large part due to the strengthening of the heart for participants in the study.

5 Reasons Why Cycling to Work is Great

7 Essential Tips for Cycling in the Rain In addition to your heart, your waistline will also thank you for taking up cycling. Participants regularly cite how addictive riding can become once you start; and the more that you’re out on your bike, the more calories you will burn.

Regular, moderate-intensity cycling workouts help to significantly raise your metabolism even after your ride is over. Cyclists often talk about having a window of 30 minutes to an hour where they can eat most foods as their body will burn it off quicker.

Sustained cycling also results in an ‘after-burn’ effect; which means that your body continues to burn calories even after you’ve stopped exercising. The higher the intensity of your ride, the more calories you’ll continue to burn after you’ve finished.

It Breeds a Positive Mindset/Boosts Your Mental Health Cycling isn’t just good for your body physically; it’s also great for your mental health. Physical activity is widely associated with boosting mental well-being and general emotions; and continued cycling is a way to help you fulfil the required exercise you should be undertaking.

According to a 2011 study by Cycling England – which published on the European Cycling Federation’s website – inactive people are more likely to develop clinical depression. The study suggests that ‘physical activity is effective in reducing clinical symptoms of those diagnosed with severe, moderate or mild depression.’

It also shows that cycling has ‘been shown to be equally as effective as traditional treatments such as psychotherapy’.

In addition to the study by Cycling England, it has always been shown that choosing to cycle also helps to counteract the onset of memory loss by contributing to the building of new cells in the hippocampus – the area of your brain related to memory.

It can be Incorporated Into Your Daily Routine to Boost Fitness Swapping your car for a bike for the majority of your commutes can help you to really embrace a healthy lifestyle. You’ll find that rather than spending hours over the course of a month stuck in traffic; you’ll instead be able to enjoy the outdoors.

According to advice on the NHS website, adults aged 19-64 need to do at least 150 minutes of moderate intensity exercise a week. If it would take you just 15 minutes to cycle to and from work each day, you could reach that goal just from your commute – taking the pressure off in the evenings and at weekends.

What you’ll also find is that by cycling to and from work each day you’ll actually have more energy to do even more exercise – so it’s a win-win. With more investment expected for cycling in the coming years, the cycling infrastructure in the UK should also improve, meaning that the roads should hopefully become safer places to cycle as well.

It Reduces Stress and Improves Sleep For some people simply falling to sleep can be an absolute nightmare. Cycling can help to tire your body out so that when it does come to going to sleep you’ll be out like a light.

According to research undertaken by Stanford University, 30 minutes of cycling can help to give those suffering with insomnia an extra hours sleep a night. The same study showed that that level of activity reduced the actual time taken to fall asleep by half.

Cycling can also be a great help to those who are not sleeping because they’re stressed and worrying about the strains of life. Neil Shah of the Stress Management Society told bikeradar.com last month that ‘cycling is one of the most effective treatments for stress and in many cases has proven to be as effective as medication’.

Tell Us What Benefits You Feel From Cycling

Have you recently started cycling and started to feel the health benefits? Have you been cycling for years and would you recommend it to others? We’d love to hear why in the comments section below.