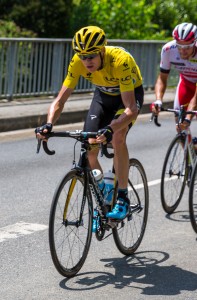 The doping scandal surrounding the Tour de France been very well documented in the media recently, following allegations that Chris Froome’s recent win was aided by doping. This is a claim that the cyclist strongly denies, however, and has since prompted him to urge athletics to follow cycling’s example and fight doping in the sport.

Froome won the Tour de France only last month for the second time. Fresh from his win, Froome is urging athletics to spend more money on anti-doping in order to stay ahead of the dopers. As a comparison, cycling’s anti-doping budget is nearly £6 million per year, while The International Association of Athletics Federations spends only £1.3 million annually. Froome told BBC Sport: “From what I understand, the testing hasn’t been at the level that it is in cycling. It is going to have to invest a lot more heavily in anti-doping. That would be a step in the right direction.” The IAAF has been under tight scrutiny since a database of 12,000 blood tests from involving 5,000 athletes was leaked, suggesting doping has been widespread.

Lance Armstrong’s legacy has had a massive impact on cycling’s reputation, a reputation that has been cleaned up substantially in recent years. Froome believes that cycling has been massively cleaned up due to advances in testing. He continued: “The testing has really evolved and the UCI has now implemented 24-hour testing. I have every confidence that the system now really works.”

Froome as a Spokesman for Clean Cycling

Froome revealed that he had been tested at his Monaco apartment on Sunday night and had no problem with being woken up at 3am by testers, if that is what it takes to assure fans he is clean. He said “I want to be a spokesman for clean cycling“. Froome is so confident about his future success in cycling, in fact, that he announced yesterday he believes that he can win five more Tours, taking his total wins up to seven. This would make him the most successful rider in the history of the Tour de France. Froome continued “I’m happy to release more information when I can and to show people they can trust these performances. Because from my point of view, if I can win the Tour de France clean then you can win any bike race clean.”

Thanks again for the help and support of Love2Date, who continue to help single people with a common interest in sport to meet. Click here to meet other single sport lovers!