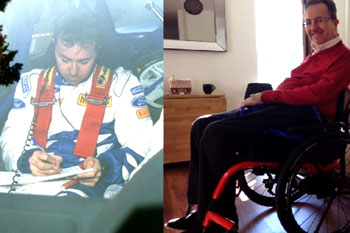 Former professional rally co-driver Chris ‘Woody’ Wood has received overwhelmingly successful support; from a recent fundraising campaign in his honour. His closest friend, Rob Sinfield, issued an impassioned ‘Thank You’ through his Twitter account; after the £40,000 target was passed on the 1st April.

‘Woody’ – who’s rally history includes involvement in works teams for Ford, Peugeot and Wolkswagen – had been due to participate in a charity bike ride in the summer of 2013. Shortly before Christmas of 2012 however, he had a minor fall. There were drastic consequences, as Chris damaged two vertebrae at the top of his spinal cord.

The injury rendered Chris tetraplegic; which resulted in him being left with little or no movement below the neck. After 10 months in hospital and through physiotherapy work, some movement was restored to his left arm but sadly not to his hands. As a result, Chris was left no longer able to touch or feel anything.

Rob set up the #HelpWoody campaign through Twitter in February to support Chris; who is desperate to regain full arm movement. This was shown to be a possibility through the use Functional Electrical Stimulation (FES) equipment. A target of between £30,000 and £40,000 was set; to raise the money that could provide the equipment required for FES.

Through the money raised to enable his access to this most up to date and effective rehabilitation technique, Chris can now hope to live a more independent life. He also needed an electrical wheelchair, hoist and other items; which the money raised can now provide.

The campaign has encouraged people to donate through the ‘GoFundMe’ website, and the current tally of £40,485 is still being generously added to. The Facebook page for the campaign has 750 likes at the present moment, and the great deal of interest generated through Twitter is ongoing.

The success of the #HelpWoody campaign is the result of a heartwarming effort from Rob and the general public. The hope now is that Woody will start to see the benefits of the money that has been raised in his name.