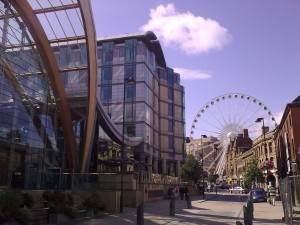 Sheffield cyclists are demanding that Sheffield Council chiefs spend £160,000 of savings on a safe bike route instead of art. According to the Sheffield Star, the city council’s cabinet are set for a discussion regarding the allocation of funding for the Grey to Green scheme. The multi million pound initiative plans to plant wild flowers, bulbs, grasses and plants along West Bar to Castle Gate, and narrow the road from four lanes to just two.

Documents before cabinet say including public art was originally planned but put on hold due to ‘funding pressures.’ Now enough money has been saved through a ‘competitive tender’ process so that the art can be paid for. However, it looks like lots of people think that spending the money on art and flowers is a waste, and that the money could be put to something far more useful, not to mention needed.

The Sheffield based campaign group Cycle Sheffield say that the public would rather the under spend be used for a dedicated cycle path, but that they were told that there was no money for it. Cycle Sheffield’s chairman Matt Turner said: “Lots of people have got in touch with councillor to say that they think the priorities are wrong. We don’t think this is a good use of the money.”

Under the Council’s Grey to Green scheme, cyclists will ride on the road or share a path with pedestrians. The Council say that adding cycling lanes to the project would cause “delays”, bringing with it a possibility that funding could be lost. They added that public art had always been a ‘key part of this scheme and successful funding bids.’

However, the scheme does include traffic calming and shared routes for walkers or cyclists, and there is an alternative biking route on the riverside. A spokesman from the Council added: “We want to improve the quality and appearance of public spaces in this area to attract jobs and investment. The decision not to include cycle lanes is not related to budget issues but best use of space.”

We’re based in Sheffield, and it has been brought to our attention that the city centre can be a troublesome area for cyclists. It’s understandable that people in the cycling community see safe cycling lanes as a priority over art; and as cyclists, we can see their point.

Here at Wheelie Good Guys, we aim to provide you with cycling news to promote further interest in the sport. But none of it would be possible without the help of Love2Date, who continue to help single people with a common interest in sport to meet.

Meet other sporty singles with an interest in cycling here.

Do You Think that Sheffield City Council Should Prioritise Art Over Cycling Lanes?

What do you think? Have your say in the comments section below.