The Doncaster Cycle Festival is an event that attracts thousands of spectators and hundreds of riders to the town. The most recent festival drew in crowds of 5,000 people to Nigel Gresley Square, to watch more than 300 riders battle it out around a closed 1km town centre circuit.

During the eight-race programme, a number of elite riders took part including former British circuit racing champion Graham Briggs and double Olympian John Tanner from Spotbrough. The top of the bill race was won by Harry Tanfield, of the JLT Condor Team, and third place was taken by Thomas Pidcock, 15, of the Speedflex Race team, who also won the under 16s boys race earlier that day. 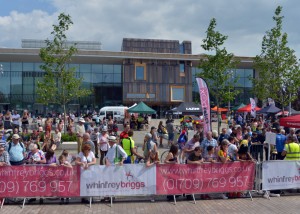 In addition to the elite riders, there was also a race for juniors aged 8 and upwards, as well as women’s races. Paracyclists were also eligible to take part in the racing for the first time.

As well as the laser-precision racing, there were also plenty of stalls and attractions to keep the crowds entertained. Entertainment included a live brass band, and more than 20 stalls offering advice on how to get into cycling and the health benefits it can bring.

Bright Future for Cycling in Doncaster

The event was organised by Martin Maltby, who is the president of the Doncaster Wheelers Cycle Club. Martin Maltby was pleased with the success of the event, saying “It was a fantastic day and everyone seemed to be having a great time watching some top-level cycle racing. The festival has grown in stature and we are seeing more and more people join cycle clubs in the area, especially the younger riders. Cycling has a bright future in Doncaster.”

The Doncaster Cycle Festival was relaunched last year after a break of about 30 years. It was organised to celebrate the arrival of Le Grand Depart leg of the Tour de France in Yorkshire, which saw an estimated 2.5m people line the streets of the county in order to watch the world’s top cyclists compete in the famous race.

Cycling Boom for the City

Martin Maltby also owns the Don Valley Cycles shop, and is confident that Le Grand Depart has sparked a boom in cycling for the town of Doncaster, which he expects to continue. Martin continued “Since the events of last year we have seen membership of cycling clubs go up and there seems to be more junior members taking part, which is great to see. With this year’s festival and the recent Tour de Yorkshire, which built on Le Grand Depart, all the signs are that cycling is becoming more and more popular.”

British Cycling provided a live commentary on the races, and the winners picked up their medals from a podium near to the start and finish line. The race day was also elevated from ‘National B’ to ‘National A’ status, giving it more prominence on the British Cycling calendar. Bob Howden, president of British Cycling, was among the spectators. The festival is set to return next year, with organisers already taking steps to ensure the success of the day.

Our aim is to provide our readers with local and national cycling news in an attempt to promote further interest in the sport. A big thank you to our sponsors Love2Date, who continue to help single people with a common interest in sport to meet.