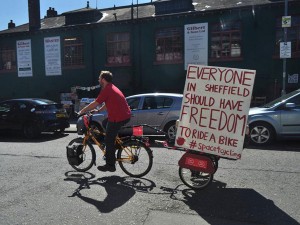 Cycle Sheffield campaign for Sheffield to be a city where cycling is seen as a genuine travel choice for everyone. Their aim is to make Sheffield one of the most bike friendly cities in the UK. In their own words, Cycle Sheffield “are the eyes and ears of Sheffield’s cycling community and talk with the local politicians, local space and transport planners and agencies such as the police. We make sure cycling is on the political agenda, influence policy and fight poor decision making.”

The Space for Cycling Campaign

The Space for Cycling campaign calls for Sheffield to be a place where everyone can ride a bike conveniently, safely and enjoyably. Organisers are campaigning for local cycle improvements that have been chosen according to 6 principles which are based on the kinds of measures that are seen in countries with high levels of cycling. Space for Cycling admits, however, that the campaign is not about ‘cyclists’. “It’s about creating the conditions where riding a bike is a realistic choice for everyone, regardless of age or ability. Wider benefits include reduced traffic noise, more friendly neighbourhoods, improved air quality and more freedom for children to play outside.”

The key principles are as follows:

Cycle Sheffield’s latest move has encouraged hundreds of people to call for safe cycling routes to be provided in the plans for the city’s new retail quarter. According to the local newspaper The Sheffield Star, they have created postcards for bikers to send to Sheffield Council, which demand that convenient cycle parking is provided and that it is ‘safe and pleasant’ for walking and cycling. The chairman of Cycle Sheffield Matt Turner said that so far, 500 postcards have been handed out, and that they’ve had to order more due to the demand. He said “We have had a fantastic response”.

Thanks again for the help and support of Love2Date, who continue to help single people with a common interest in sport to meet.

Meet other sporty singles with an interest in cycling here.