Tour de Yorkshire having been a rip-roaring success, the Tour of Britain is now in full swing. With riders crossing the borders of England, Scotland and Wales during the 897 mile long journey, this ride is certainly not for the faint hearted.  With the ride covering the majority of Britain, though the South West will be omitted, fans of the Tour of Britain will get their chance to see top international cycling names, such as Sir Bradley Wiggins and Peter Kennaugh at many different stages of their Tour of Britain. 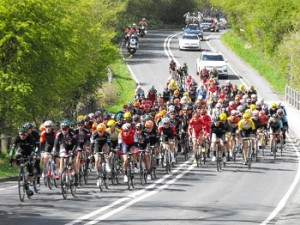 The ride is being undertaken in eight phases between the 6th and 13th September, starting at Beaumaris on Anglesey, where they are to head North across Wales for Wrexham.

Day Two’s race is from Clitheroe to Colne, where the cyclists will then cross over in to England and on to the next leg between Cockermouth and Kelso, in the Borders, finishing their Third day at Floors Castle.

Stage Four is the longest stage, where the cyclists are cycling from Edinburgh to Blyth and then straight from Prudhoe to Hartside – a grand total of 135.2 miles.  Despite all the miles, they will be rewarded with beautiful Scottish scenery whilst on their route around the Capital on Wednesday.  The fourth stage begins at Holyrood Park and is mapped around some of the city’s most famous landmarks, including the Scottish Parliament, up Royal Mile, in view of Edinburgh Castle and around Arthur’s Seat, before heading through to Musselburgh and then South, through areas in the North East of England, such as Wooler, Alnwick, Ashington and Blyth.

Friday is the day the riders make the greatest ascent.  They will undertake a calf-burning 3,453 metre incline on their journey between Stoke and Nottingham.

Fakenham to Ipswich is the route planned for the penultimate East Anglian leg where the riders will have to gear up for their last push the following day.  This consists 14 laps of the 6.2km circuit around London, thus concluding their epic journey, whilst taking in Piccadilly Circus, Trafalgar Square, the Strand and Whitehall, too.

Support the Tour of Britain

People all over Britain, both keen cyclist themselves or avid supporters, are engrossed in this magnificent race across Britain.  How will the cyclist cope on their trek through our beautiful, varied and challenging country? People across the country will be watching and showing their support as the cyclists journey through their local areas and it is also being aired live on ITV4 and British Eurosports2 from 1pm daily.

Our aim is to provide our readers with local and national cycling news in an attempt to promote further interest in the sport. A big thank you to our sponsors Love2Date, who continue to help single people with a common interest in sport to meet.