New statistics from Visit England have shown that tourism spending in Yorkshire has risen by nearly 50% since the Tour de France visited last year. The stats show that £380 million has been spent on tourism over the last year in the region, which is a rise of 45%. Visitors to Yorkshire have also risen by 23%, with 2.3 million people visiting. 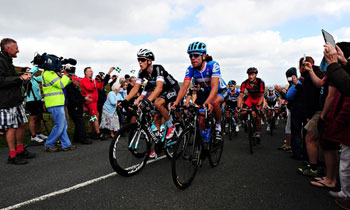 As regular readers of Wheelie Good Guys will know, we spent a great deal of time covering the opening stages of the Grand Depart, which visited Sheffield on July 6th last year. On that day alone, the event brought 380,000 spectators to the region.

There was a huge amount of excitement around the attention that the region would receive as a result of the famous cycle race, with many local businesses celebrating the increase in tourism. And quite rightly so, as figures have proved that the event has had an ongoing positive effect on the region with regard to visitor numbers.

Gary Verity, chairman of Welcome to Yorkshire, the county’s official tourism agency, said: “We knew that once we showcased Yorkshire to the world, we would inspire potential visitors to come and see this beautiful county for themselves.”

Many local businesses have since been reaping the benefits, including cafes, shops and hotels. Figure have also shown that in the last year, 5.3 million people stayed overnight in Yorkshire, which is a huge jump of 18% on the previous year.

The Legacy of the Grand Départ in Sheffield

There have been other benefits to the Grand Depart’s visit to Sheffield, including plans to roll out a bike loan hub, scheduled anniversary events and celebratory street art. Also, many believe that there has been an increase in the amount of people taking up cycling as a hobby in their leisure time, or even just to commute to work.

Sadly, Sheffield Council seem to affecting everyday cycling negatively. Only recently, they made the decision to not include a separate cycling lane in the Grey to Green scheme to rejuvenate Castlegate. As a result, many Sheffield residents feel that it is not safe to cycle in the city. There have also been calls for more safety measures around tramlines, which can prove hazardous to cyclists. More than 120 bike accidents on tram tracks have been reported to CycleSheffield.

Thanks again to the kind support we receive from our sponsors Love2Date. Their site specialising in online dating for sporty people is perfect for those with a mutual love of cycling.