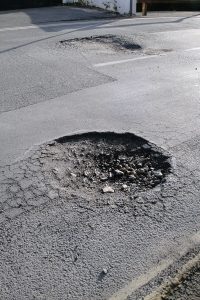 In total, 943,000 potholes are to be fixed across England over the next year.

In what is definitely positive news for cyclists, the government has announced that a £50m pothole fund is to be divided up between 118 local authorities.

In an attempt to tackle the ‘plague’ that potholes have become, the Pothole Action Fund will be used to repair the dangerous state of England’s roads. But is this enough to make the country’s roads safe for cyclists?

Will this mean that you no longer have to avoid certain roads or parts of town because the craters in the road have been repaired?

It is estimated that more than 1,000 people are injured by falls caused by potholes each year. Further to this, records on FillThatHole – a website that enables people to easily report potholes and road defects, shows that over 6,369 road hazards have been reported in the UK, since the beginning of 2016. It is figures like this, that show what a widespread issue potholes are

More and more cyclists are concerned with their safety on the roads. One FillThatHole user wrote that “cyclists are forced to ride very close to the central white lines as some lanes are dangerously broken up”, while another asked the authorities to ”do something about it immediately! There are potholes and ruts that are progressively getting worse. It is only a matter of time before there is a serious accident caused by the lack of action over a period of years.”

Speaking about the increasing number of cycling accidents and injury claims due to potholes in the UK, Paul Darlington, a consultant solicitor for Cycle SOS and a cycling safety campaigner who works closely with Cycling England, had to say; “Highway authorities are able to avoid 75% of the injury and damage claims caused by potholes, which suggests that their inspection programme is focussed as much, if not more, on providing data to support their statutory defence – of having an inspection regime in place – than it is upon actually removing the defects which cause the losses.”

In addition, Mr Darlington suggests that maybe, in this case, “the best solution is to have an inspector on a bike, as he will very soon become far more pothole savvy than one in a van!”

But is £50m enough to solve the pothole problem? Councillor Martin Tett, the Local Government Association Transport spokesman doesn’t think so, talking about the issue, he said: “While £50m is a step in the right direction, councils need more than 230 times that amount to cover the £11.8bn cost to bring our roads up to scratch.
The money announced will help those councils receiving it to tackle potholes, but it would not even completely cover the cost of the £69m faced by the average authority to bring its roads up to a reasonable condition.”

To make sure that the funding will go to where it’s needed, each portion of the £50m has been calculated according to the size of the local road network in the area.
This will see Devon County Council receiving almost £2m towards filling 36,830 holes while Slough will get £43,000 to help fill 811 potholes.

Aware of the urgency of the matter, Patrick McLoughlin, the transport secretary, has declared that he knows “how important well-maintained roads are to people across the country. Almost every journey starts and ends on a local road, so the government is giving councils £250m over the next few years, to specifically tackle the blight of potholes in their area.”

In total, 943,000 potholes are to be fixed across England over the next year.

However, not all local authorities will be a part of this new project. Birmingham, Sheffield and the Isle of Wight will not receive a share of the funding, as their highways are maintained under Private Finance Initiative contracts. Just the same, London’s funds are covered by Transport for London, while Scotland, Wales, and Northern Ireland are responsible for their own road maintenance funding.

As Patrick McLoughlin, the transport secretary, said the Pothole Action Fund is definitely a step in the right direction. However, it will take much more money to be able to declare England’s roads, completely safe for cyclists.

Find out how much your local council will receive, by clicking here.